Positive Impacts of Stalin's rule in the U.S.S.R

During the reign of Stalin , plans for economic development began. Stalin decided to carry out a program of intensive socialist construction. The result of that were the five year plans.The First Five-Year Plan called for rapid industrialization of the economy, with particular emphasis on heavy industry. The economy was centralized: small-scale industry and services were nationalized, managers strove to fulfill the output quotas, and the trade unions were converted into mechanisms for increasing worker productivity.This eventually branded Russia as an industrialized country.

To satisfy the state's need for increased food supplies, the First Five-Year Plan called for the organization of the peasantry into collective units that the Soviet authorities could easily control. The first five year plan became successful to a certain extent as Soviet Russia was more economically developed which also funded for the industrilization in the country.However, due to the unrealistic targets set by Stalin, the plan soon became an economical failure.

In January 1,1931, the Barkeley Daily Gazette newspaper reported that "the nation (Soviet Union) can look upon a year of enormous achievements in the direction of industrial expansion and collectivisation.Translated into human terms,it means that the economic ways of life for 160,000,000wre fundamentally changed.At the same time it was a year of costly sacrifices, sharpened internal conflicts ,food shortage and political pressure" .


Before introducing the five year plans Stalin said,""Agriculture is developing slowly, comrades. This is because we have about 25 million individually owned farms. They are the most primitive and undeveloped form of economy We must do our utmost to develop large farms and to convert them into grain factories for the country organised on a modem scientific basis."


Stalin very accurately described the state of the nation. There was barely any mechanization, the use of scientific measures was minimal and peasant farmers produced usually for themselves and the local area. Stalin was not content  with such little development in the nation. 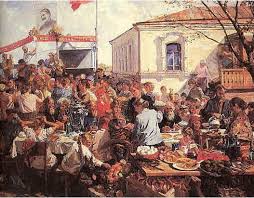 To have more positive gains from agriculture, Stalin introduced collectivisation. This meant that small farms would be gathered together to form one large massive one. These bigger farms would be called collectives. As they were large, there was every reason to use machinery on them. The more food that could be grown the better as the cities and factories could suitably be fed. Hungry factory workers would not be in a fit enough state to work effectively. If this happened the Five year plans  introduced would not succeed.Through Collectivization,  the soviet government can also expect more agricultural productivity which will help the nation economically. Collectivization was essential for the five year plans to succeed.


Although Stalin was a ruthless leader he also did things that helped the Russians. He gave women education and jobs equal to man.Stalin promoted girl's education; women were treated fairly and given equal employment opportunities.Family life changed dramatically under the rule of Stalin. Attempts were made to change the role of women because Marx (revolutionist communist) had identified them as being exploited historically. October 1917 was a milestone in the emancipation of women. For the first time the complete economic, political and sexual equality of women was put on the historic agenda.  Women would be given the opportunity to work outside of the home and, with the establishment of political democracy at all levels, would be able to play a full role in all spheres of political and social life.This did not fail to continue during stalinism as there were a lot of female soldiers during world war two.


To achieve this goal, women would have to be released from the traditional confines of domestic chores, with childcare becoming the responsibility of society as a whole through the provision of cheap, good quality public dining halls, laundries, sewing centres, creches and nurseries thus lifting the burden of child rearing in the shoulders of women.The number of women in higher education as a percentage of the total has risen from 28 percent in 1927, which was during Stalin's rule.

Due to the Soviet expansion in Eastern Europe and the defeat from the battle with France, Germany's chancellor, Adolf Hitler, decided to launch a war on Soviet Union.This came as a shock to Stalin as Germany and France had signed Moltov-Ribbentrop pact which ensured that the two nations will not harm each other.However, Hitler breached the pact , leaving Stalin no choice but to try to gather his forces and fight against Germany. 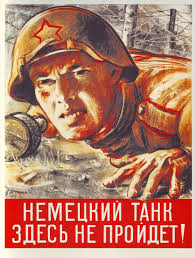 The unexpected attack almost left a confused and demented Soviet state. By the autumn, German forces had destroyed most of the Red Army and the Russian air force. The German forces surrounded and besieged Leningrad - where over one million people died of starvation and cold - and were approaching the outskirts of Moscow.

After hasty retreats and easy German victories, the Red Army solidified its defense and against all the odds clung on to the battered city. In November 1942 Operation Uranus was launched by the Soviets, and the German Sixth Army at Stalingrad was encircled.

The Battle of Kursk in July 1943 was one of the greatest set-piece battles in military history. The Red Army withstood a massive German assault, and then counter-attacked. For two years Soviet forces pushed the German army back into Germany, until in May 1945 Soviet forces accepted the surrender of the relic of Hitler's army in Berlin.